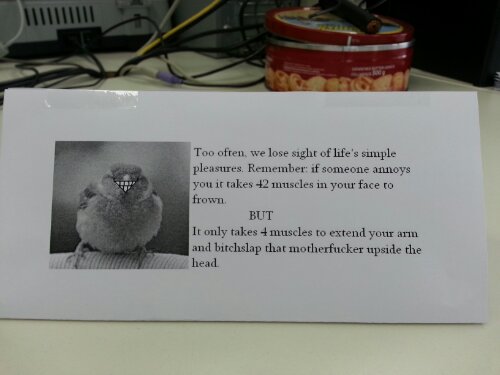 Just wanted to share my motivation for today with you guys :)

I totally forgot to tell you how lovely the last 2 weeks had been; big bad R. was on holiday! And work has never been so much fun. But as of today he’s back and ruining everybody’s mood again. Hence the reminder to use those muscles wisely!

There’s a story to the sparrow in the pic too; here in the Netherlands, there’s a saying “iemand blij maken met een dode mus”. Literally translated it means “to make somebody happy with a dead sparrow”, meaning… Putting something awesome in prospect, which turns out to be a huge disappointment (a.k.a. the dead sparrow). However, when you mix up the saying, you end up killing somebody with a happy sparrow. This once happened during lunch break (mixing up the saying, not the actual killing ;)), and has been an inside joke between us girls. N. (the one I mentioned had a stick up her ass back when I started on the job) worked a little Paint magic, and our happy sparrow, as you can see in the pic, was born. And I couldn’t have wished for a better illustration to the text!

Thank you for reading :)

What Did She Say?!