Being the avid reader that I am, I love buying books, and series of books in particular. Wait… Make that series with awesome cover art. I know, I know, you shouldn’t judge a book by its cover, but damn… I just can’t resist beautiful covers! And it’s even more awesome when you find a beautiful edition of something that you’ve wanted to read for ages :) So a while ago, I decided to finally get these: 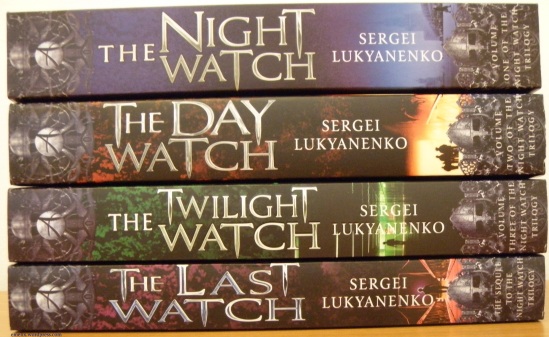 Ooh! This makes me feel like a kid in a candy store :)

It’s very rare that I read a book because I liked a particular movie adaptation, but this is one of those cases. I’ve watched The Night Watch a lot of times, and I’ve read the first book way back when it came out, but after seeing the movie again not too long ago I decided I really needed to read the books. Unfortunately, I haven’t gotten to the “reading” part yet (my to-read stack is too damn big these days), but I’m totally looking forward to it. However, now that there’s a fifth book in the making I guess I don’t have to rush things… There’s little I can stand less than having to wait for a new book in a series!

Now, for the ones of you wondering about the books… Basically, they’re fantasy/science fiction, but in a crazy Russian way. I don’t read much of either genre at all, but I don’t think there’s anything like this series. I don’t want to spoil anything so I’m not even going to try and explain what in hell they’re about. I’m not even sure if I could! I might give it a shot after I finish reading, but I’m not going to promise anything ;)

So… Have you read the Watch series or seen the movie? What did you think?

Like I’ve already mentioned in Part II of the great Hunger Games dilemma, I went to see the movie. And oh boy… I don’t remember the last time I left a movie with such mixed feelings!

Let’s start with something positive! There were some things I really liked about the movie; the casting was pretty well done! There was one exception, but you’ll have to read on to find that one ;) My favourite “side” character in the books was Cinna, who’s portrayed in the movie by the amazing Lenny Kravitz! So that was very pleasing. Another thing that I liked, were the special effects. They were done very well, and I loved the “extra” peek in the Game Maker’s office; this wasn’t really mentioned in the book as such.

The movie was quite like the book, meaning that they didn’t screw up the storyline or whatever to make it more appropriate for a movie. They did a pretty good job on that, especially considering that quite a large portion of the book is basically Katniss’ thinking.

And now… What I didn’t like. The last thing I stated as positive, works against the movie as well, at least in my opinion. For anyone who hasn’t seen the movie yet; I must warn you, this might be a bit of a spoiler! At a certain point, there’s Rue, and Katniss has a great fondness of her. However, if you haven’t read the book (like for example my best friend, who came along to the movie), it’s a bit of a “what the fuck-moment”; aren’t they supposed to kill each other off? What’s so special about that kid? Of course, if you’ve read the book you’ll know that Katniss has a weak spot for Rue because she’s the same age as her sister Primrose, but the thing is, a lot of people haven’t.

There were a lot more things that were hard to understand if you didn’t read the book; at one point, my best friend asked me why the people looked so weird. After the movie, I had to explain him the whole background story on the different districts and the Capitol. Another thing I was missing, was the story of the Mockingjay Pin. Why the fuck was that changed up in the first place? Katniss didn’t get it off the market, for crying out loud. I really dislike the way they’ve made it into something that’s pretty much meaningless!

Another disappointment, which is a bit more personal I think, was President Snow. When I read the books, I imagined him to be a bald, creepy looking motherfucker. A little like Baraka from Mortal Kombat (google it!). In the movie though, he reminded me of Santa Claus. And we all know Santa Claus isn’t really evil! So this was a bad casting, if you ask me.

Considering that the movie was over two hours long, I think there might have been room for some more “depth” in the story. For example, another one of the things I liked in the book, was the way it fucked my mind the whole time because I was wondering if Peeta was for real or not. In the movie, this isn’t shown at all, and I’m really wondering how they’ll explain this (and the earlier mentioned Mockinjay thing) in the sequel (which I’m guessing will come) because it’s been a very important storyline in the books.

All in all, I was really disappointed. Maybe I had set the bar too high, I don’t know, but at one point I was glancing at my watch to see if it was almost done. I used to check the time when I was reading the books too, but only to see how much more I could read and still manage to get a bit of sleep because I had to work the next day. I know it’s really hard to make a screen adaptation worth seeing, but I believe they could’ve done a lot better.

I’ve already made up my mind; I’m not going to see any sequel. What did you think of the movie? Am I completely wrong here? Or did it really suck?

As I’ve already told you a while ago (in fact, it was my first post ever), I’ve been in a huge dilemma about the Hunger Games movie. But I’ve finally made up my mind! Actually, somebody made it up for me, and I’m going to see it tonight. Yay! I’m really curious how it’s turned out, and if I’m gonna hate it as much as I usually hate screen adaptations. I’ve heard from a lot of people that it’s really good, although none of them has read the books… So still not sure what to think. But I’ll let you know!

By the way… Has anybody else been “bothered” by folks bitching that it’s a Battle Royale rip-off? I’ve had exactly that same discussion with my best friend (yes, the Chili Chicken guy!), and later on I’ve come across it a few times as well, for example on 9gag.com;

Admittedly, it’s fucking hilarious but I’ve seen (and loved) Battle Royale 1 and 2, and I still disagree on this point. Sure, kids are killing each other in gruesome ways (I’ll just assume for now that’s not only in the Hunger books but in the movie as well), but there’s more of a storyline to Hunger Games. Oh well, either way I think I’ve won the discussion, because it was my best friend’s idea to see it tonight. Ha!

So… Wish me luck! Or don’t… Bitching about the movie will make a far more interesting post ;)

It’s time for another movie/book dilemma, just a tad different; to read or not to read? I’ve been considering to try to go through the Twilight Saga. The pressed version, that is. Why in hell would you want to read about sparkly vampires, you ask? Well… Beats me. I guess I really like the book covers ;) And I might have heard that the books are way better than the movie, and being, well, me, I tend to believe that’s possible.

I’m a little OCD-ish when it comes to books; if I start on a series or trilogy or whatever, I *need* to own all of them. I don’t care how many they are, they must be in my collection. And read. In the case of the Twilight Saga, there’s four of them, and books don’t come cheap where I’m from. Especially when they suck. So the real question here is; should I invest my rare time and even more rare money into this?

Admittedly, I’ve watched the first movie a few months ago. Not because I really wanted to, but because I was bored and there wasn’t anything else on TV. And in a way, it amused me. Not so much that it turns me into a drooling idiot whenever I see what’s-his-face-playing-Edward-Cullen, but more like… Oh hell, I don’t know. I’ve even considered looking at the rest if they happened to cross my path… I think you could call that “passive interest” or something. I guess it has something to do with girls being attracted to sparkly shit ;)

Now I’ve had a thing for vampire related everything pretty much as long as I can remember. I’ve seen all three (yes, there’s three, but don’t bother with the second two) Dracula movies, I’ve seen all the episodes of True Blood (and read all the books, plus I have pre-ordered the latest), I even read the first four Vampire Diaries. Apparently, there’s a TV series of that one as well, but there’s no way in hell gonna watch that shit, because I don’t think I’ve ever disliked a persona in a book as much as that Elena Gilbert chick. Damn. And then there’s -of course- Kim Harrison’s Rachel Morgan/The Hollows series. Read and loved. Hell yeah.

I’m probably forgetting a few, but the main point here is that all those vampires are dark, sexy and dangerous. Not blonde, sparkly and underage-looking. So why am I even considering Twilight? Especially now that I’ll see Kristen Stewart’s face all the time when I’m reading? Seriously… WHAT IS WRONG WITH ME?! You know what… Don’t answer that.

Yeah, I’m losing my fucking mind. So I need your help… Should I give Twilight a shot? Or should I just shoot myself throught the fucking head for just considering it?

I’ve read the Hunger Games trilogy by Suzanne Collins last year, before I even knew there was going to be a movie (I know, everybody else knew, but I don’t like movies that much!), and I was super impressed. I went through the whole series in a few days, and I absolutely loved the first two books… The third one was, well, just not the same to me. Still good though, but on a lot of ways a different story from the first two. So, end of this month, the Hunger Games movie is going to be in theatres. And I’m not really sure what to think of it. I’m a book person, and in my opinion, the book is (almost – there’s one exception) always better.

Curious as I am, I’ve already checked out the trailer, and it looks all right. So right now, I’m in a dilemma; to see or not to see? I know, nobody will die if I see it and hate it, but I’ve seen so many wonderful books being raped (excuse the choice of words please) by movies, and it pisses me off every damn time. It’s insane how upset I can get about something like that happening, and not just for the €10,- wasted on a movie ticket!

Has anybody of you already seen the movie? Or are you (not) planning to? What would you do in my place?

What Did She Say?!